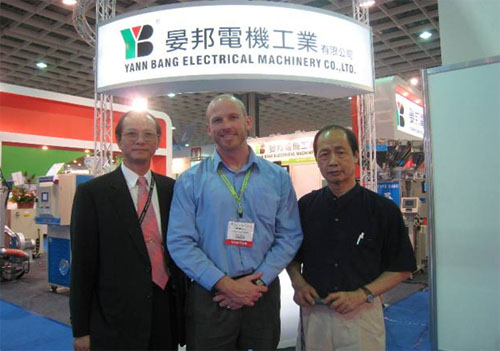 Yann Bang has always kept the spirits of Research & Development, better work environment, lower costs and shared success since its birth in 1974.
Yann Bang continues to work on R&D in the hope of surpassing its competitors in the Plastic and Rubber industry from the EUROPE, US, JAPAN and other developed countries.

Yann Bang`s goal is to provide a better choice to its customers in the Industry and after thirty years of hard work they have finally made it!
Yann Bang has become the best quality company in the Plastic and Rubber Auxiliary Industry in Taiwan. Yann Bang has been the top choice for many well-known companies. Therefore Yann Bang should be considered as one of the best choices for companies which want to become quality oriented, efficient and non-traditional. By placing great hopes in the 21st century Yann Bang will persist in its professionalism and precision stance.

YANN BANG MACHINERYstrives to be the best quality equipment in the Plastic and Rubber Ancillary Industry. Their goal is to provide a better choice to its customers in the industry for Hopper Loaders, Hopper Dryers, Mobile Stands, Dehumidifying Dryers, Masterbatch Feeders, Die Temperature Controllers and other Ancillary Equipment.

Product Inquiry
×
The information you enter here will be sent directly to the recipient. It is not stored on this sites database. Read more in our Privacy Policy
SEND